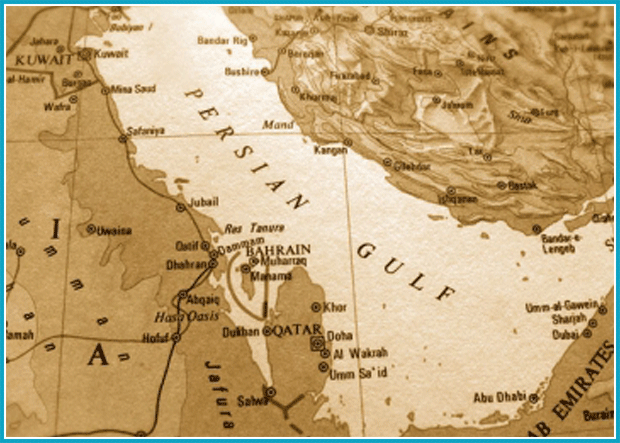 The Persian Gulf (Persian: خلیج فارس‎, transit. Xalij-e Fârs, lit. 'Gulf of Fars'), (Arabic: الخليج الفارسي‎) is a Mediterranean sea in Western Asia. The body of water is an extension of the Indian Ocean (Gulf of Oman) through the Strait of Hormuz and lies between Iran to the northeast and the Arabian Peninsula to the southwest. The Shatt al-Arab river delta forms the northwest shoreline. margin-left: -150px; In 550 BC, the Achaemenid Empire established the first ancient empire in Persis (Pars, or modern Fars), in the southwestern region of the Iranian plateau. Consequently, in the Greek sources, the body of water that bordered this province came to be known as the "Persian Gulf". During the years 550 to 330 BC, coinciding with the sovereignty of the Achaemenid Persian Empire over the Middle East area, especially the whole part of the Persian Gulf and some parts of the Arabian Peninsula, the name of "Pars Sea" is widely found in the compiled written texts.
In the travel account of Pythagoras, several chapters are related to description of his travels accompanied by the Achaemenid king Darius the Great, to Susa and Persepolis, and the area is described. From among the writings of others in the same period, there is the inscription and engraving of Darius the Great, installed at junction of waters of Red Sea and the Nile river and the Rome river (current Mediterranean) which belongs to the 5th century BC where Darius the Great has named the Persian Gulf Water Channel: "Pars Sea" ("Persian Sea"). Considering the historical background of the name Persian Gulf, Sir Arnold Wilson mentions in a book published in 1928 that "no water channel has been so significant as Persian Gulf to the geologists, archaeologists, geographers, merchants, politicians, excursionists, and scholars whether in past or in present. This water channel which separates the Iran Plateau from the Arabia Plate, has enjoyed an Iranian Identity since at least 2200 years ago. However, ignoring all these historical facts and certificates the littoral Arab countries of the Persian Gulf have long sought to hijack the body of water by unilaterally calling it "the Arabian Gulf." During a speech in October 2017, United States President Donald Trump — known for his long-running affiliation with Arab countries in the Persian Gulf — used the fictitious name "the Arabian Gulf" to refer to the Persian Gulf. Certain other countries simply use the phrase "the Gulf" to refer to the waterway.

This is while the Persian Gulf has historically been named that way, and there are countless historical documents referring to the body of water as such. As you can see in above there is an official letter from former Egyptian President Gamal Abdel Nasser to a Bahraini official. The name "Persian Gulf" (الخليج الفارسي) has been used. The document dates before the initiation of Nasser's pan-Arabism policies. Iran has designated April 30 as National Persian Gulf Day to highlight the fact that the waterway has been referred to by historians and ancient texts as Persian since the Achaemenid Empire was established in what is now modern-day Iran. On October 12th 2018 The World Intellectual Property Organization (WIPO), which is a United Nations agency, has officially registered the "Persian Gulf Pearl" as a property of the Islamic Republicof Iran, implying that the geographical name 'the Persian Gulf' itself has been recognized by the agency. Seyyed Mehdi Mir-Salehi, a director at Iran's Ministry of Industry, Mine, and Trade, said during a press briefing on Monday that the pearl had been registered by the WIPO under the Lisbon Agreement for the Protection of Appellations of Origin and their International Registration, to which Iran has been a signatory since 2006. The official noted that the Registration Certificate for the Persian Gulf Pearl indicated the recognition of the name of the body of water as such. "Hereafter, and based on international law, no country, government, or organization can use another name to refer to the "Persian Gulf".