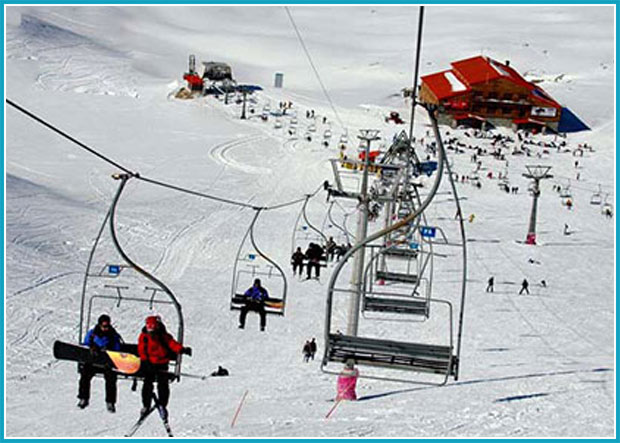 History of Dizin Ski Resort The international Dizin ski resort was discovered in 1962 by an international team seeking to explore the mine in central Alborz, under the direction of Qasem Gillanpour, the champion and ski trainer of the time. This area was recognized as an appropriate ski resort and was established in 1964 by installing a mobile trapezoid device in Dizin Gardens as an out-of-season practice spot for the national team. In 1965, the head of the Winter Sports Federation visited the Dizin District, and the region was defined as a ski resort and its infrastructure works, including the construction of a road from the Aar sin Coal Mine has started, Finally, in 1967, with the installation of a 2400-meter long telecommunication line in the valley to the high-rise parking lot and the arrival of the first telecabin to Iran (the summer cafe), the establishment of the summer restaurant and the installation of a trapezoid beginner was started and until the year 1969 lasted. Following these activities, the installation of the peaks telecabin was finished and the complex establishment was completed in 1972 and the ski area was prepared for skiers. In 2006, after nearly three decades, the development of the Dizin ski resort has been resumed with private sector investment. Dizin's activities are not limited to winter. In 1993, with the opinion of the World Ski Association and the collaboration of specialists in this field, the construction of a grassland ski resort was launched. During the summer, it is also possible to ski on the lawn on this track. The ski grass slope on the Dizin is 650 meters long. Every year, the world's grassland championships take place. Simultaneously, in other areas of the Dizin, there are activities such as mountain biking, archery, kite rides, etc. Tourists can also visit the flower garden and see rare species of the mountain plants. Where is Dizin?

Where is Dizin? The Dizin is a northern part of Tehran located on the Alborz slopes. If you have traveled from the Tehran-Karaj-Chalous road, you should have seen its introduction boards. This area is located north of the mountains of Tehran (Gajjar region), 123 km from Chalus road and 71 km from Shemshak road. If you arrive from Karaj on the Chalous road, take 65 km from the Karaj-Chalous route. After the Gachsar, you can go to the mountain instead of continuing the northern route and reach the village, which has now changed its name, but due to its geographical location from other villages in the area the most famous and attractive. After the village of "Velayat Rood", behind several residential complexes you reach the ski resort of Dizin. The road to Dizin is not only the Karaj route - Chalous. Another route is always closed in the winter. A path that is far closer and less tricky. Maybe you've been to the weekend or a day off to Fasham, Lavasan and around it. From Levizan to Tehran, go to Lavasan-Fasham, instead of Lavasan to Fasham and then Meygun and continue until you reach Shemshak Path. From there, take about 30 minutes to reach the highest point of the Dzinin ski resort. The weather is very suitable for winter (20-centigrade), with a lot of sunny days and a pleasant summer weather (20+ centigrade), with plenty of facilities and convenient access, Dizin has become a winter tourist destination in the Middle East.

Dizin facilities: Dizain's reputation related to special features includes technical tips such as tilt, track length, track length, venue, and amenities. The date of the installation of the first telecabin in Dizin is 1969, which includes three 3 telecabins, two Chairlifts, seven diving ski lift and a hammer lift. Some of its tracks are: the Snow Park Path, the U Path, the Beginner Path and the Lawn Track. The facilities of this track are based on the development of the area, including two hotels, 19 cottages and five restaurants. The ski season in Dizain, which has provided the most time for skiers in Iran, is from early December to late May.

Types of tracks: Athletes at Dysin have a variety of options due to the existence of various tracks, Beginner Course: The patient staff on the beginner's trail has created a safe place for learners of this fun sport of all ages. Track and Paths: A delightful environment for Snowboarding athletes to take full pleasure. The ski run is the first ski run in Iran, approved by the World Ski Federation for holding official tournaments and became internationally recognized.