A summary on the Iranian show and theatre

Narrative and storytelling have a tremendous role in protecting Iranian culture, the significance of these stories goes far beyond as they are interwoven with ancient Iranian myths and artifacts, recorded on inscriptions, or have been narrated to the generations and eventually re-created by the art of show. Therefore, the show in Iran has a long history. So long that the paintings of actors and dancers was found on precious stone pottery discovered in archaeological excavations, Although the millennial have passed since that time, the unbroken connection of the Iranian people with Show and drama is also apparent not only in the native rituals, but also in theater and cinema halls.
Naghali (narrative)
One of the varieties of show in Iran, whether pre- or post-Islam, performed in various forms, was Naghali or "narrative". This style of show was performed in the Sassanid period, in the form of storytelling, accompanied by a harp musician. But with the arrival of Islam, music and singing were left out. For this reason, the narrators have inevitably relied on the body's movements as well as the variety of their vocal and intonation. The theme of the narrative was often derived from the epic literature of Iran. Alongside the Shahnameh , courageous stories of the Shi'a religious leaders (imams) was also narrated. The narratives chose the epic genre because of the movements, such as fencing, Bragging and horseback-riding represented by the body movements added fascination to the story and brought the viewer attention. 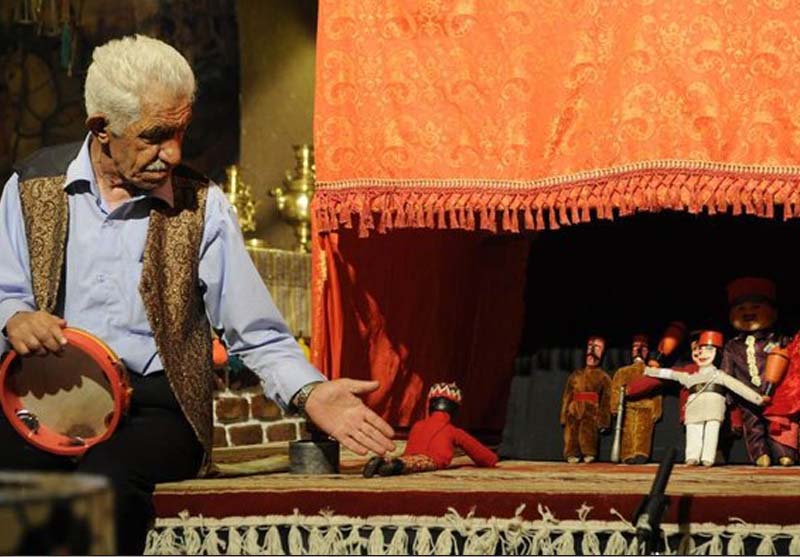 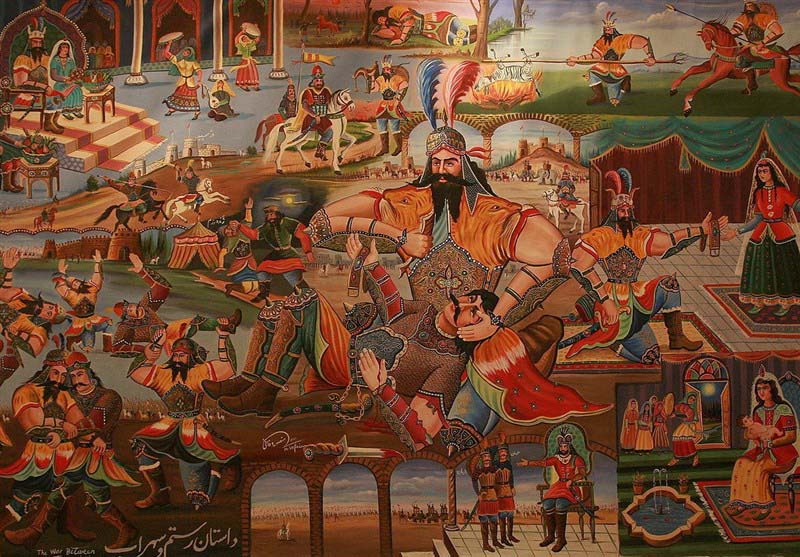 Pardeh Khani (story telling)
During the Safavid rule, European travels to the capital of that time, Isfahan became more and more. Hence, the narrative biography was also reflected in the travelogues by these tourists. It was during this period that the narratives found their main hangouts, traditional teahouses, where men gathered for hours to drink tea and spend time. The narratives went to this places, and in the days when there was still no radio, cinema and television, they entertained people. It was then that the Narratives used painting boards to add visual attractions to their storytelling. They hanged it on the wall of the tea house and, like a teacher who teaches on a Blackboard, narrated the story Scene by scene.
Ta'zieh
Ta'zieh is a kind of "narrative theater", symbolism is so strong in this show, that all the details of the stage, such as the river, the weapons, and the armies, are represented by a symbol. For example, a water container symbolizes the Euphrates River, a plant or pot, is the symbol of the palm garden! Walking or running actors around the scene, is the symbol of passing time, as well as the journey of the army. This way of displaying, shows the true picture of the battle scene in the minds of the audience, and leads to mourning. Nowadays, in some cities of Iran, such as Isfahan , Yazd and Kashan, during Muharram Ta'zieh is held in places like the hoseynieh and the Tekieh. 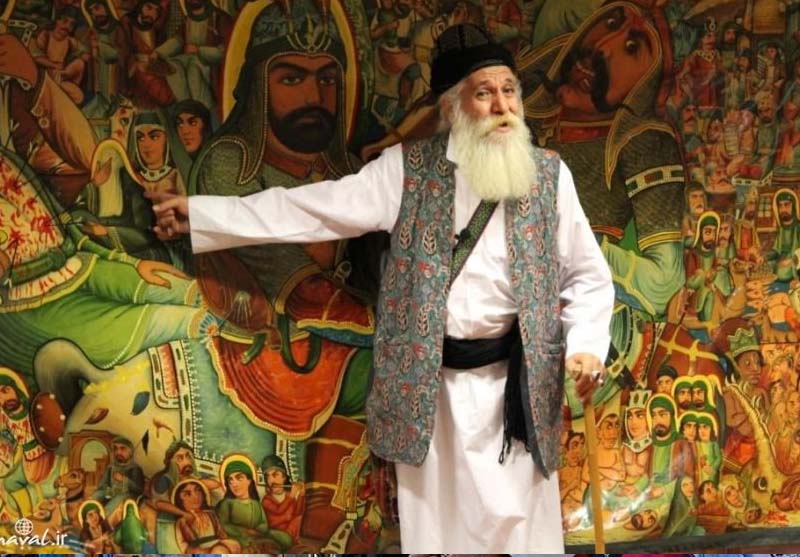 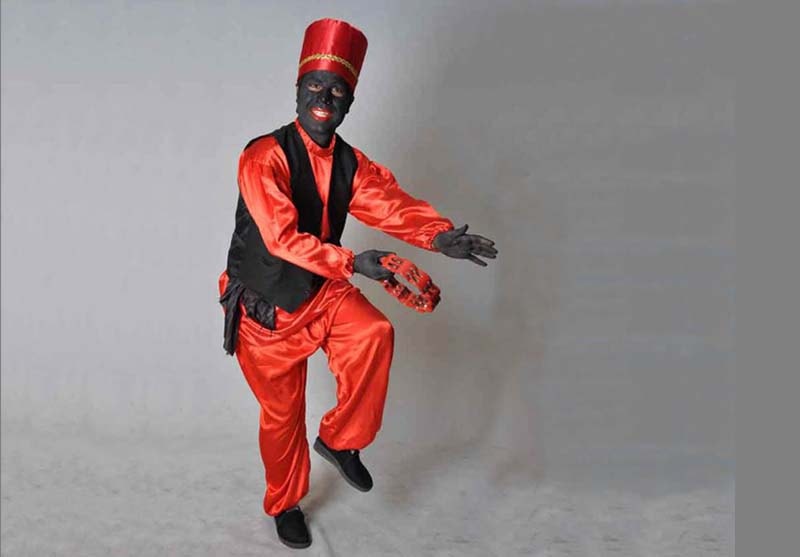 Street shows
Apart from what have mentioned in above, there are many different kinds of display which are popular among common people. One of these forms of the show, which is seen before the Nowruz celebration in the streets and alleys, is the Hajji Firuz show. Hajji Firuz is a slim person who wears red dresses and makes his face black. Hajji Firuz accompanying the Amu Nowruz are in fact the legends who give people the tiding of Nowruz arrival with dancing and singing happy songs in the streets.
Also, dances and ritual shows at the time of harvesting are other forms of popular performances among Iranians. These plays, which were performed during harvesting crops such as rice and grapes, are rooted in ancient Iranian rituals. 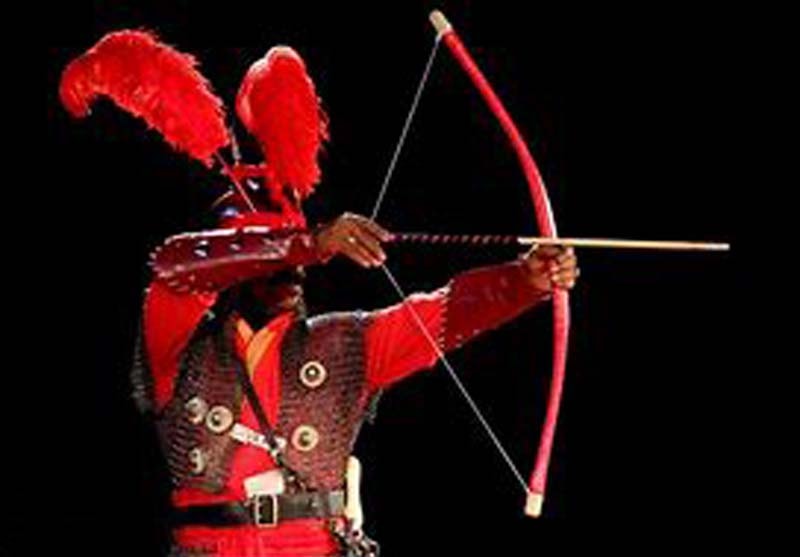 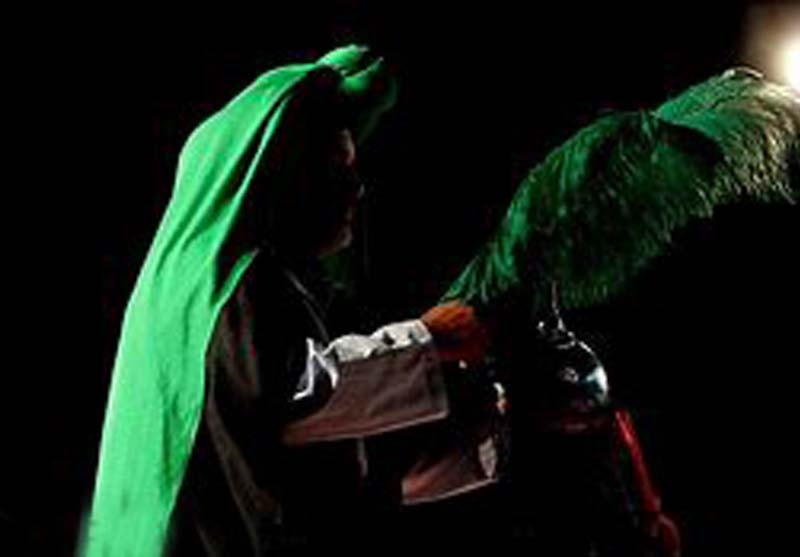 Puppet shows in Iran
Among the plays and cinema in Iran, the role of the puppet show cannot be ignored. In the sixth and seventh the AH centuries, the "puppet shows" were popular which were displayed at the street. This is the same show in Ottoman Turkey called "Karagöz". Usually, at night, they raised a tent and lit fire at its' two sides. Inside the tent, there was a box that was used as the stage. The puppet masters were hiding behind the box to perform the show by moving the yarns attached to the dolls.
Nowadays, the show in Iran, both in the field of theater as well as in the cinema, has been shown in various branches according to different sections of Iranian society. If you travel to Iran in February, you can attend the most respected theatre Festival, which annually displays the top theaters of leading directors from Iran and the world.