Religious pilgrimage and observance are common ceremonies around the world. Followers, on foot, reach a destination that is considered sacred for them, and by that they reveal their loyalty to their beliefs.
The world’s most famous pilgrim walks.
Pilgrim gatherings are well known around the world. One of the countries which hosts religious walks is India. Hindus attend the "Kumbh Mela" once a year. During this religious ceremony, People gather in a massive number to perform the rituals, including a sacred immersion in the Ganges River. But Kumbh Mela is not the only Hindu pilgrimage. Another ceremony takes place at a temple called “Sabarimala”.
The other followers of Religious pilgrimages are Buddhists. Every year the Buddhists travel on foot every year to reach a temple called “SenSoji” in Japan. When they walk to the temple for praying, they assume that they have gotten more reward and that their prayer will be accepted sooner. Needless to say, other religious centers around the world, such as the Vatican and the Al-Aqsa Mosque, also hold such a celebrations. 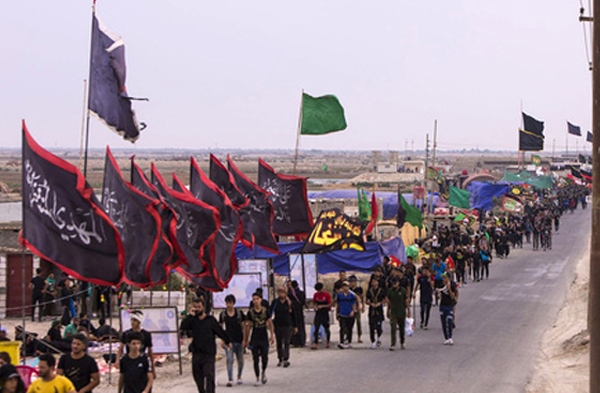 Arbaeen, religious pilgrimage in Iran and Iraq
forty days after the Ashura , on Arbaeen day the Shia Muslims in Iran and Iraq, walk toward the Karbala in Iraq. This long journey, which generally lasts between 4 to 12 days, begins at the three borders between Iraq and Iran and ends at the cities of Najaf and Karbala. this walk is one of the most Important rituals among the Shia Muslim.
What stands out in the Arbaeen pilgrimage
Traveling to Karbala during Arbaeen's time is inexpensive and almost free. Along the way, Iranians and Iraqis welcome Arbaeen pilgrims by setting up tents for many services such as free food and drinks, resorts and canopies, etc. Along the pilgrimage route, there are kind hosts who insist on inviting the pilgrims to their tents.
The distance between two cities of Najaf to Karbala is also full of residences called "Mawkib", which are used as resting areas for pilgrims. Mawakeb have many forms. Sometimes in the form of a nomadic tent and sometimes a large hall that has the capacity of accommodating hundreds of people. Occasionally people offer their multi-storey houses or even cottages to pilgrims. It should be noted that all of these structures are prepared for the reception of Arbaeen pilgrims and have no further use during the year. The owners of these Mawakeb are generally from Iraq, but there are also Iranians, Lebanese, Pakistanis and Turkish Shia.
Food along the way to Karbala
The Arbaeen pilgrimage route is packed with a variety of food stands, including local food and beverages. One of the most famous one is Arab coffee, which is poured in small cups and given to pilgrims to redeem their tiredness. Along the way, mineral water bottles are distributed free of charges.
In addition to drinks, meals including votive provender and snacks are also available. Large trays of dates, decorated with sesame, are also presented to pilgrims on the way. The owners of these Mawakeb also welcome pilgrims with a variety of fruits.