A look at the history of tea development in Iran

Quote from Anjou Shirazi, a contemporary folklorist: "Tea has to touch four senses. Its color should caress your sight, its aroma and flavor your taste, and its sensation should fresh your feelings up!” Of course, tea infused with cinnamon or cardamom or lemon, is one of the best Iranian drink . It has good effect on the essence and the soul! The Iranians owe this great fortune to "Haj Mohammad Mirza Qavanloo", the "Kashf al-Saltanah", known as the "Father of Iranian Tea". The person who learned growing tea in India from the English during his mission as Consul general of Iran and brought the tea seeds to Iran. Of course, the training did not happen easily. At that time, Indian tea was a monopoly of England and training of its cultivation to the Orientals was forbidden! Therefore, during his course of education, Kashef identified himself as a Westerner. He was a French businessman, not an Iranian diplomat. Kashef brought back what he learned about tea. Tea's journey with "Kashef" began in India in 1285. On this trip, of course, "tea" was not the only fellow traveler of Kashef on this trip. In addition to tea, coffee, cinnamon, pepper, clove, cardamom, mango, turmeric and ginger, as well as several other agricultural products came to Iran. Tea was cultivated in Lahijan, which had a climate similar to Shimla in India. Lahijan was a good host for tea. Later, planting and harvesting green tea flourished, and drinking tea became an Iranian habit. However, before Kashf al-Saltanah brought tea to Iran, the Iranians were familiar with tea. In his travelogue, Adam Olearius also refers to the "Khatai’s tea houses" when describing the city of Isfahan in the Safavid era. It seems that the tea consumed in these houses came from China and was considered to be a relatively expensive beverage, and not all people could drink it. But thanks to tea cultivation in Guilan, the social and cultural impact of tea soon spread to Iran. From shop and market to celebrations, tea along with other traditional beverages was a constant element of gatherings, parties and hang outs. Gradually, the tea wares and teapots began to appear in Iranian homes. Stekan (traditional teacup) and saucers with beautiful pattern and designs, along with trays, sugar bowls, samovar and red flower teapot, were placed in each woman's kitchen. Like tea itself, Samovar was not originally from Iran. this Russian traveler soon establish a foothold in Iran. The Russian-made Pewter samovars and the nickel and brass samovars made in Broujerd became famous in Iran. Of course, during the Qajar period, Isfahan was the center of producing samovar in Iran. 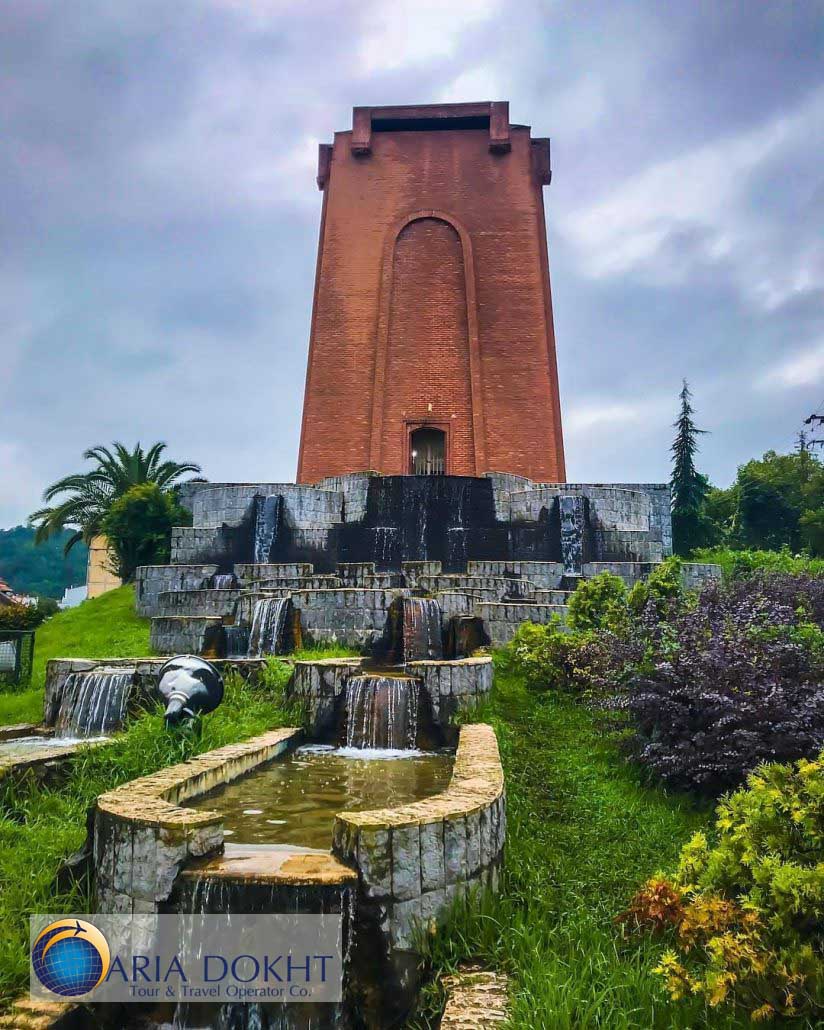 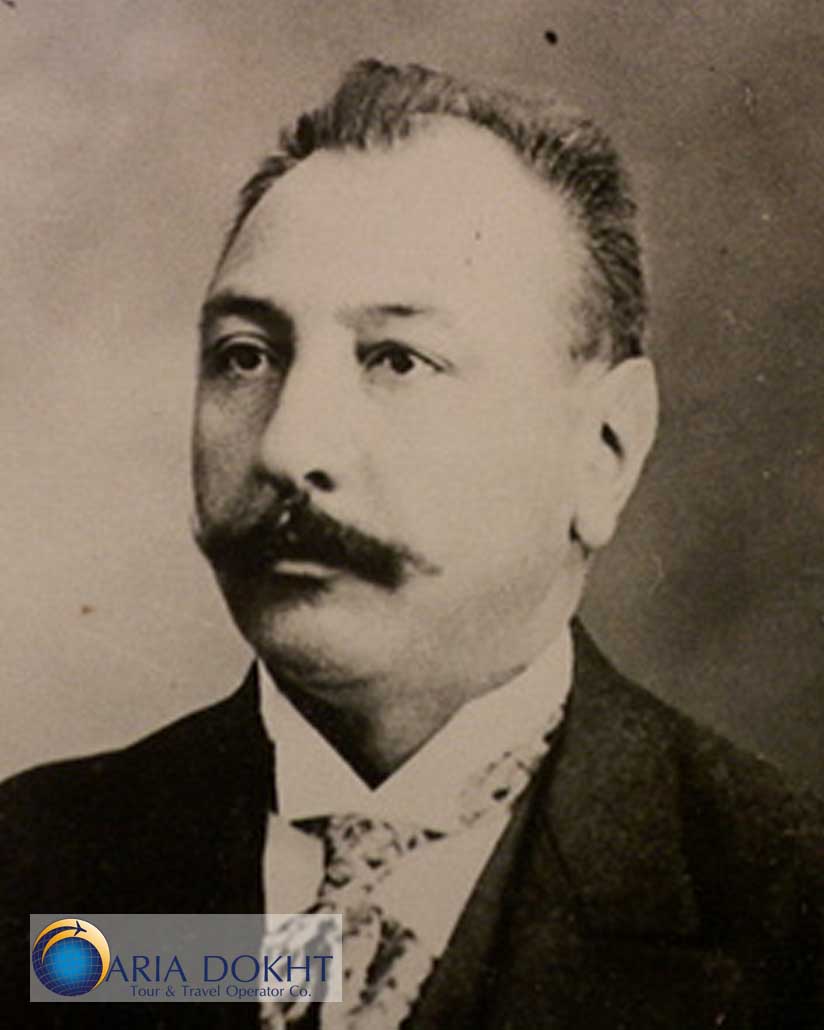 serving sugar cubes alongside the tea
Sugar cubes, the best of the sweets to accompany the bitterness of the tea. The one that, if comes next to the tea in a saucer, gives this collection the nickname "Ghandpahloo". Sugar cube is a symbol. A sweetmeat. Iranians grind it over the bride and groom's head and put them on the niche to sweet. Sugar journey in Iran had many ups and downs. Because it was one of the reasons for political conflicts. Pahlavi’s photos show that Reza Shah traveled to various Iranian cities to open sugar factories, including the Abcoo and Marvdasht Sugar Factory. 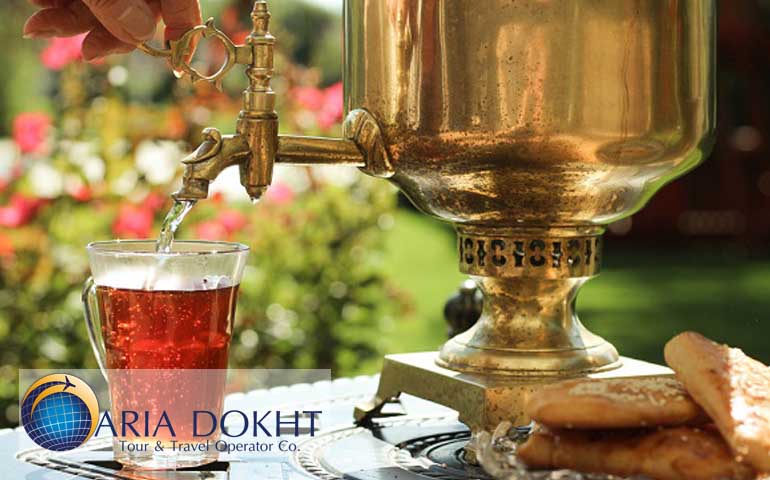 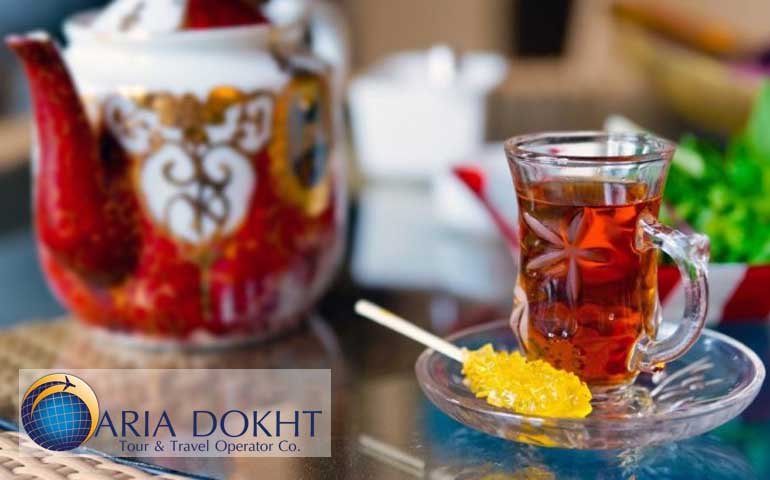 Tea in traditional tea houses.
With the popularity of cultivating tea in Iran, not only people find a relaxing and affordable beverage, but also the cafes, which until then were the hangout of the nobles and aristocrats, became more popular and the place to go for all people from different walks of life. Tea was brewed in Iranian tea houses. people were gathered in the teahouse to chat and drink tea. Baristas say that the tea houses have their own language. Tea here is some kind of means of communication! In some cafes, for example, the custom was that the crowds who wanted to fight would put their tea glasses backward on the saucer. But at the same time, if someone puts his saucer on top of the cup, it doesn't mean any thing, Rather, it was done to keep the tea from becoming cold, or the customer's intention was that he would not want another tea for now. Tea and tea making equipment next to the hookah are the main elements of the ambiance in Iranian teahouses. This equipment includes a samovar and a teapot used for "brewing, cups and saucers for "drinking". Iranians drink tea out of habit drinking tea is popular among people of cities villages and nomads, hence making tea wares and Samavars was a thriving industry during the late Nasser al-Din Shah's empire. At that time, constructors made all kinds of samovar and devices beside samovar, such as cups or basin, brass, copper, and nickel pitches in their workshops. Before samovar became common, a copper kettle (which was used in almost all parts of Iran) and a kind of Pitcher called Kanduk, which was common in eastern, southern and northeastern Iran, was used to brew tea. They put the kettle or Kanduk next to the fire and boiled the water inside it. Then the tea was added to the same boiling water. Later, as the samovar became common, the pot of boiling water and the tea pot were separated 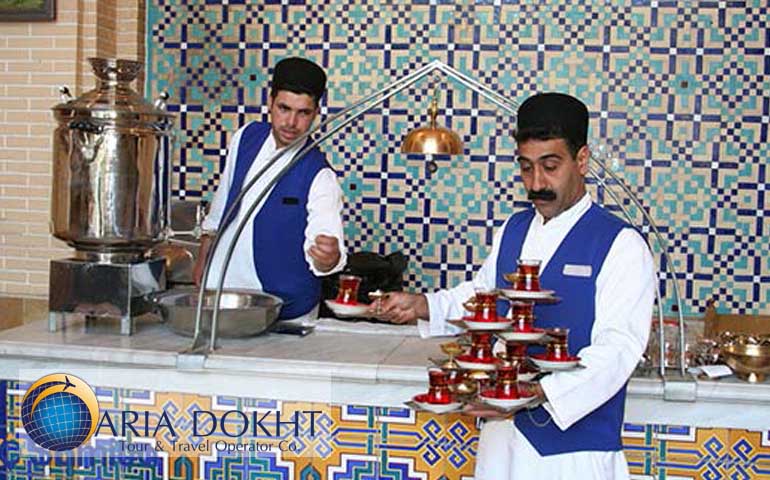 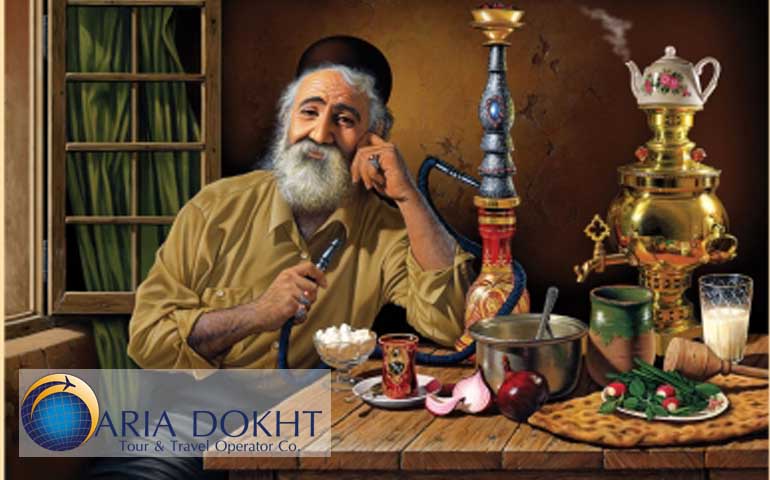 Tea rituals at Iranian gatherings and parties
In addition to Iranian tea houses, it has a special place in ceremonies and gatherings. In the proposal of marriage, for example, bride reveals her satisfaction by bringing tea. Also, adding flavors like cinnamon, cardamom, lemon, chamomile and different flavors gives the tea a more pleasant aroma. Tea is ubiquitous in Iran. in formal parties, private gatherings, governmental departments and organizations and companies, and finally, on fire with a family who went to picnics and gardens. 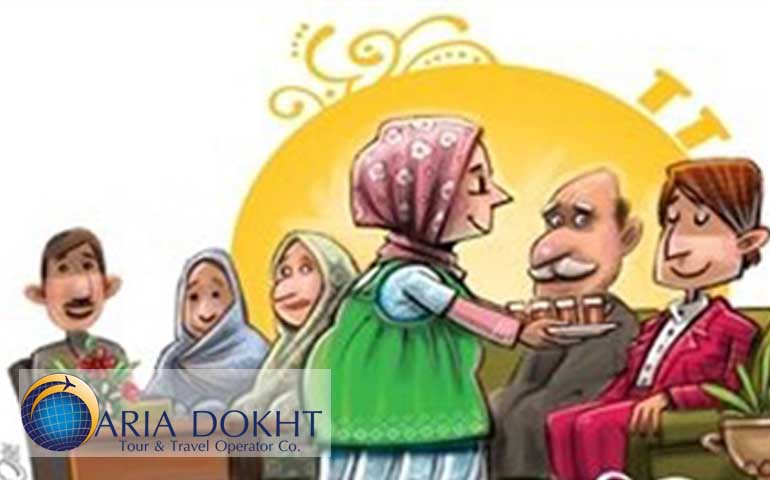 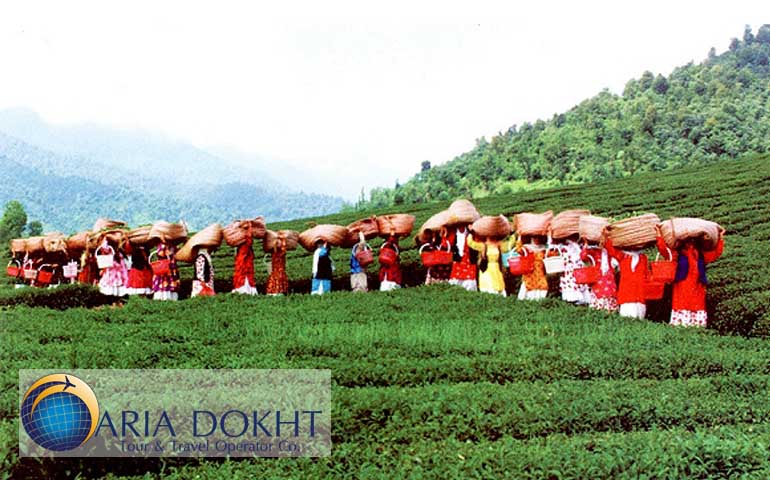