to get rid of the negative aspects in life and to rid the evil eye by making vows or sacrificing cattle, this is the definition of vow in Iran. People in Iran vow to god to do something for charity. hence if they meet their needs, they donate votive offerings as a public service. distributing votive offerings to people, which is still very common tradition among Iranians during Muharram, is performed in various forms throughout Iran.
Votive offerings in public Mourning ceremonies
A popular way of vow in Iran is to cook traditional food and give away to Imam Hussain’s mourners. To make this vow, they prepare foods for the mourners and donate among them as dinner after the ceremony. Varieties of food and its amount are depending on the owner of the vow who may be a rich person from the middle class or even from the poor. Therefore, in the month of Muharram , especially the first 10 days of this month, votive food is prepared in each part of city for the sake of charity and respect of Imam Hussein and the martyrs of Karbala. One of the common foods in these votive offerings is rice with stew. Traditionally, this vow was due to the lack of rice at that time, to the specific group and individuals who were able to purchase these products. They made a vow by cooking rice early in the morning and preparing meat, and add spices to the food and gave it to the people. Food distribution is in this way that a group, generally neighbors and acquaintances, send out their dishes and pots a day before, when the votive food is prepared, the owner fills the dishes and send them back. Votive food is also sent to relatives. But most of the food is distributed among the poor and needy people, who usually gather in front of the door of the owner's house. 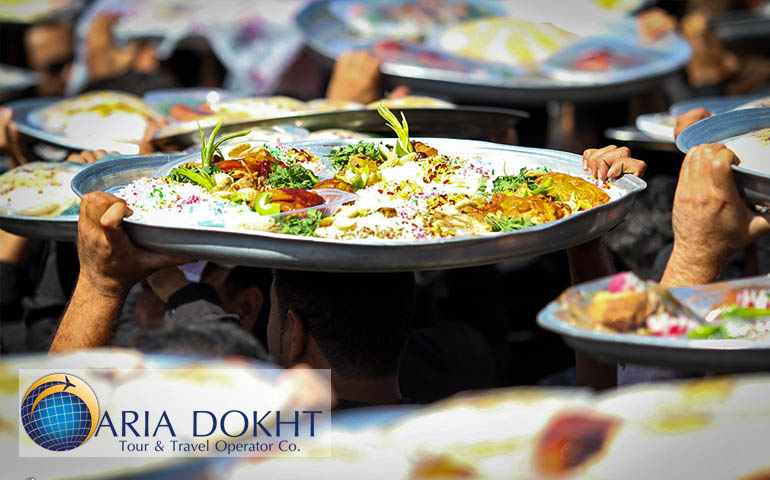 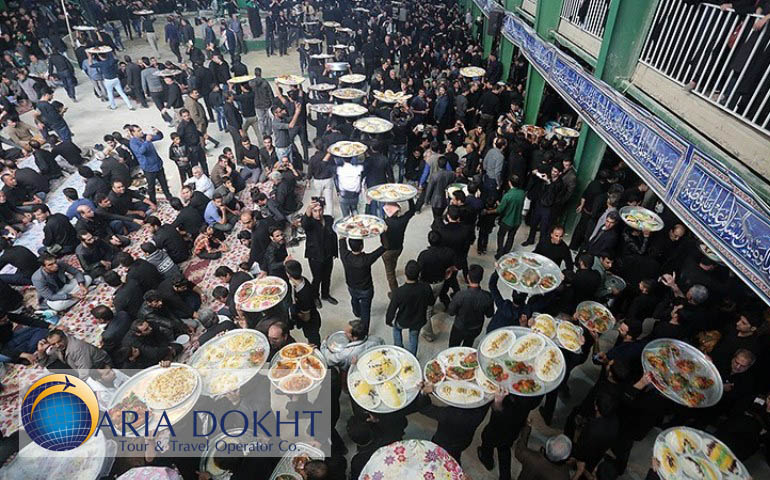 The Manner of votive offering in the Qajar period
Another interesting votive offering, was bread and yogurt. This vow was Specifically given for sake of Abbas the younger brother of Imam Hussein and was performed on the day of Ta’sua . The donation was consist of a slice of bread and a bowl of yogurt, with each year added to the age of the owner of the vow, one slice of bread and a bowl of yogurt was added to the number of the previous vow.
Pottage, a popular votive food
pottage is one of the dishes commonly offered during Muharram. The way of cooking pottage is to mix some meet with rice, chickpeas, and fresh vegetables and cook it on low heat for several hours. another popular meal to vow is Halim, the ingredients are oatmeal or Wheat and meet, they make the meet completely separated from the bones when thy mixed the ingredients until it is turn to Puree. 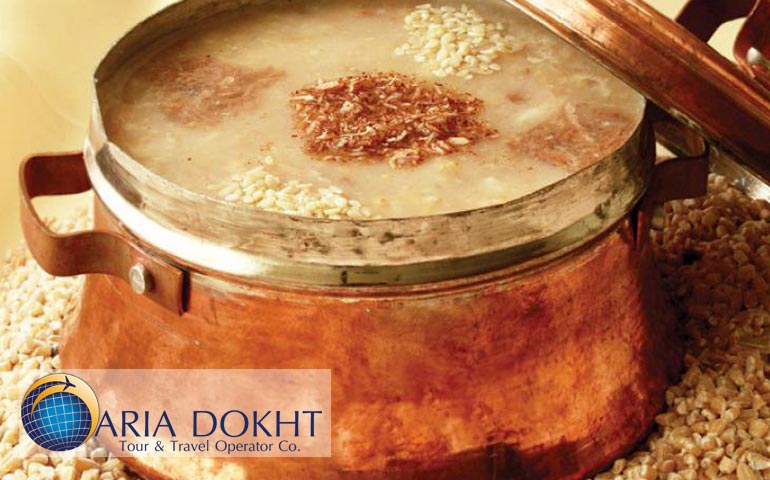 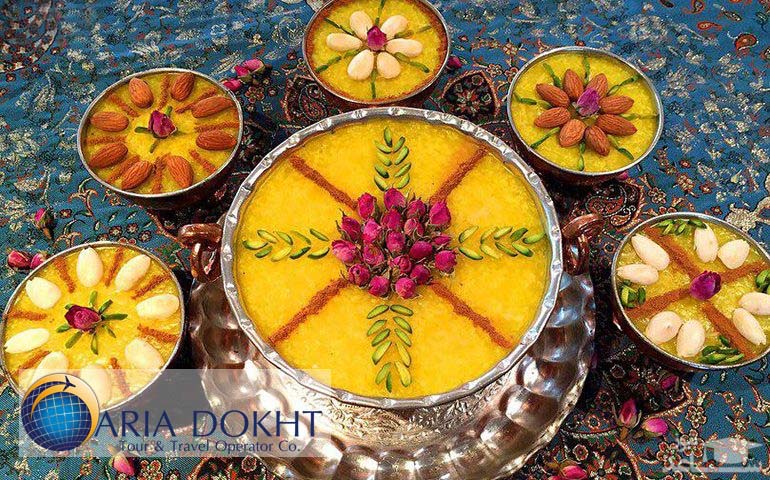 Votive sweetmeat
Another type of votive offering still remaining in its old way is the saffron Hallva consisting of flour, sugar, oil, rosewater and saffron. This votive offering is more dedicated to the day of Arbaeen.
cooking Sholeh-zard as a votive offering, goes back to hundred years ago and is one of the most popular Qajar vows. This sweet dessert is made from rice, sugar, oil, saffron and almonds.
Votive candle
Foods and meals mentioned above, are just one side of the coin. Besides foods, other votive offerings are also common in Iran. One of them is votive candles. As in Ashura people go to Tekiyeh and in the pulpit, they light 41 candles. This vow is more common among ordinary people, but it is sometimes seen that the nobles also make this vow. 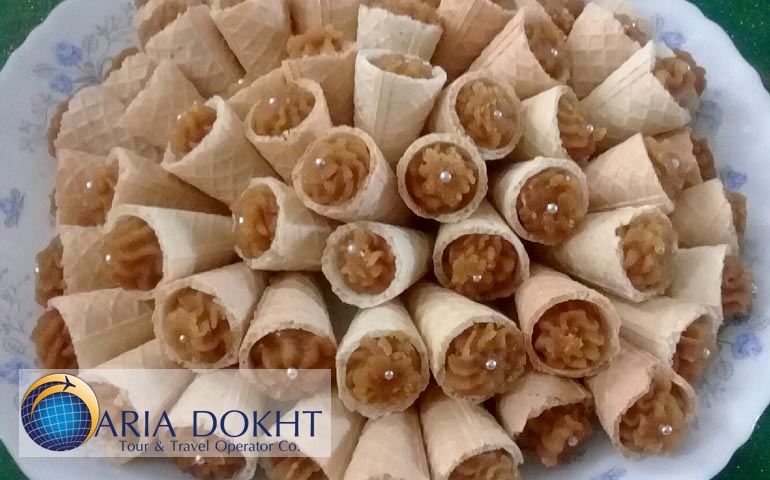 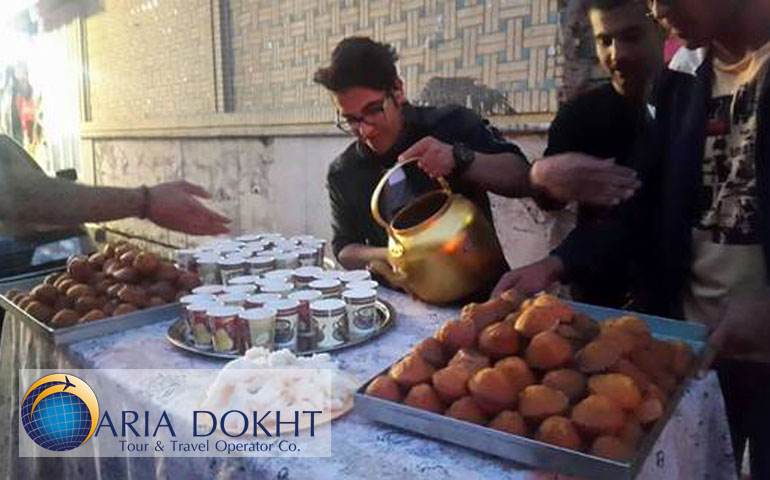 A royal votive offering in the Qajar era
Making a vow does not belong to any social classes, and even during the Qajar period there are some reports of votive offerings within the royal family. One of the most interesting vows in Qajar era was Nasser al-Din Shah’s pottage. This pottage was cooked every year by the royal family under the supervision of the king himself. The cause of this votive offering is said to be because of the king's mother's vow for his son's reign.
Another vow that was popular among ordinary people, was votive Samanu. The method of cooking Samanu was that they poured some wheat into the water and after germinating, they squash them. The water obtained from this operation was consolidated and poured some flour, hazelnuts, almonds and peanuts in it. The sweetness of Samanu was from wheat. Usually the chef was left alone in the kitchen and prayed. No one was allowed to enter the room, and after half an hour that steam appeared on the surface, women entered the room with greetings and salutes, lifted the pot lid. The chef was usually a well-known old lady.
Ajil-e Moshkel Gosha / votive Nuts
donating nuts is a pre-Islamic Iranian tradition. These nuts are a combination of raisins, dried berries, almonds, hazelnuts, pistachios, chickpeas and walnuts. They wrap all these nuts in a small ruche and distribute them among people.