Iran and its Adventure Potentials

Text by: Hadi Saberi
Iran, a country with an area of more than 1,648,000 square kilometers (equal to the total areas of France, Switzerland, Spain, and the United Kingdom), is located on the 3,700,000-square-kilometer Iranian Plateau, ranking 17th in the world. The plateau extends to South Asia, Southwest Asia and the Caucasus, from the Zagros Mountains in the northwest to the Sulaiman Mountains in the east. The area is bounded on the north by the Caucasus and the Caspian Sea and all along the Amu Darya River to its source, and on the south by the Persian Gulf and the Oman Sea. Thus, between the fertile Tigris and Euphrates valleys on the one hand and the Indus River on the other, there is a triangle-shaped high plateau, surrounded by mountains and high altitudes. These mountains include Alborz Range which separates from Ararat in the northwest of the plateau. Extending along the southern coast of the Caspian Sea and its unique Caspian Hyrcanian mixed forests, it reaches Baba Mountain (Koh-i-Baba), an extension of the Hindu Kush, and its tail connects to the Himalayas. In the west, there are Kurdistan and Zagros mountains, which diagonally point to the east of the Iranian plateau, and its various strands continue parallel to the Persian Gulf and the Oman Sea. On the east side of the plateau, there are three mountain ranges from north to south parallel to the Sulaiman Mountains. 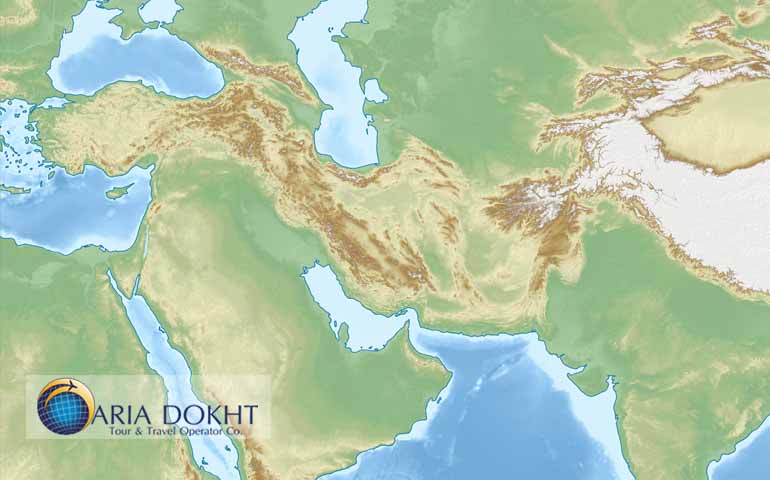 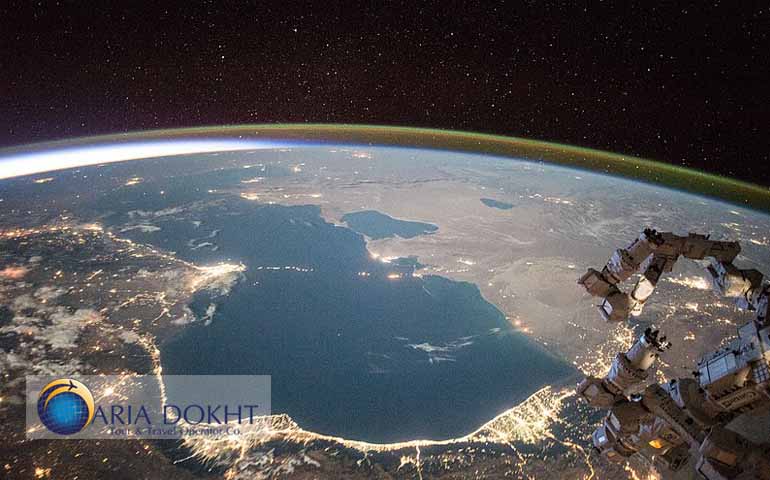 Caspian Sea, the Largest Lake on the Planet Earth

The climate of the Iranian plateau is dry; its winters are cold and dry and summers are very hot. From a meteorological point of view, it is one of the most dynamic regions in the world controlled by the interaction of the Siberian High Pressure Front, the western Mediterranean winds and the seasonal winds of the Indian Ocean (Monsoon).

The tallest peak of the Iranian plateau is Tirich Mir, with a height of 7708 meters in Pakistan. However, Iran’s highest peak, Damavand, with an altitude of 5671 meters, located in the northern part of the country on the southern margin of the Caspian Sea, is the highest mountain in the Eurasian rangelands and west of Hindu Kush. Here is the land where you can see the world’s largest lake and Caspian Hyrcanian mixed forests, the only surviving ancient fossil on planet Earth, descend to Dasht-e Kavir and Dasht-e Lut below 300 meters in height, and enjoy a unique scene/combination, and rarely see old oak and poplar forests on this plateau. 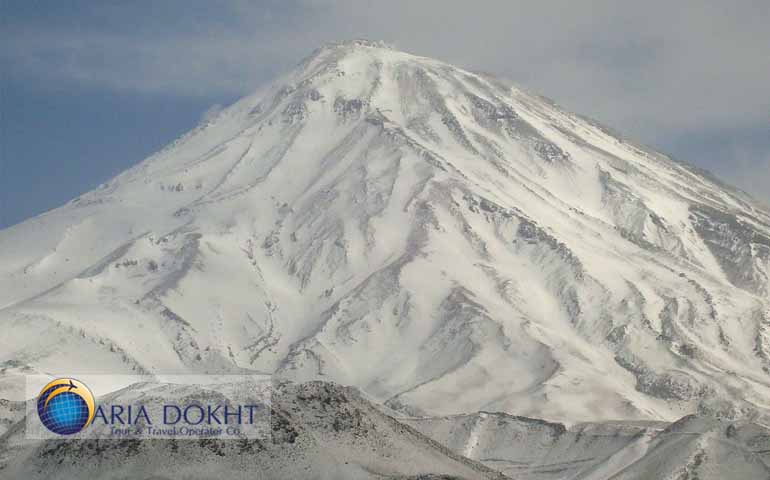 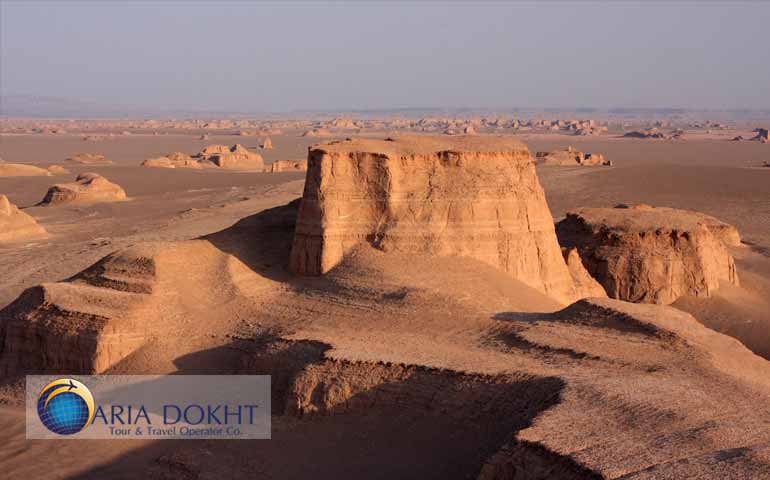 The plateau, with abundant wildlife, includes leopards, bears, hyenas, wild boars, Gazelles, ibexes, and mouflons. These animals are more commonly found in the forest mountains of the plateau. The shores of the Caspian Sea and the Persian Gulf are the wildlife of aquatic birds such as seagulls, ducks and geese. Deer, hedgehogs, foxes and 22 species of rodents are found in the deserts, and ferrets and black Asian bears live in Baluchistan. A wide range of amphibians and reptiles such as toads, frogs, turtles, lizards, salamanders, and vipers live in the Baluchistan area along the Alborz and Zagros slopes. 200 species of fish live in the Persian Gulf and 300 species of the most important commercial fish and sturgeon are found in the Caspian Sea.
You are touring a country with over 6,000 kilometers of land border with Pakistan (959 km), Afghanistan (945 km), Turkmenistan (1414 km), Azerbaijan (759 km), Armenia (351 km), Nakhchivan (… Km), Turkey (500 km), Iraq (1458 km) and over 2440 km of water borders, a region of high biodiversity and one of the 17 megadiverse countries on planet Earth. Iran’s biodiversity ranks 13th in the world.

Since Iran is a land of full continental climate, a variety of adventure sports can be experienced at any moment. For example, at the same time when you enjoy skiing in the northern regions and slopes of the Alborz in winter, you can go rafting, diving, and water skiing in the southern rivers and shores of the country. On the contrary, when the warmth of the southern areas makes you impatient, you can enjoy hiking, ecotourism and camping in the northern and western and mountainous areas. The programs we offer in Iran include mountaineering, rock and big-wall climbing, trekking and hiking, mountain skiing (ski mountaineering), ice climbing, mountain biking, canyoning, caving and desert touring/trekking. Here are the best seasons and times to enjoy these programs. Although these activities are applicable to high-level professionals, athletes, and adventurers throughout the year, the best time to run these programs will be as follows:

At the heart of the Alborz Range, you can experience a variety of hiking and trekking programs in the spring to fall and discover the unique beauty of the deserts in the south and the Caspian Hyrcanian mixed forests in the north. You can climb the Damavand peak, the 12th highest peak in the world in terms of relative altitude and the highest (semi-active) volcano in Asia, and ski 5 months a year there. You can climb the 650-meter magnificent granite wall of Alam Kuh at an altitude of 4,200 meters above sea level and ski in its southern and western slopes in winter and early spring. 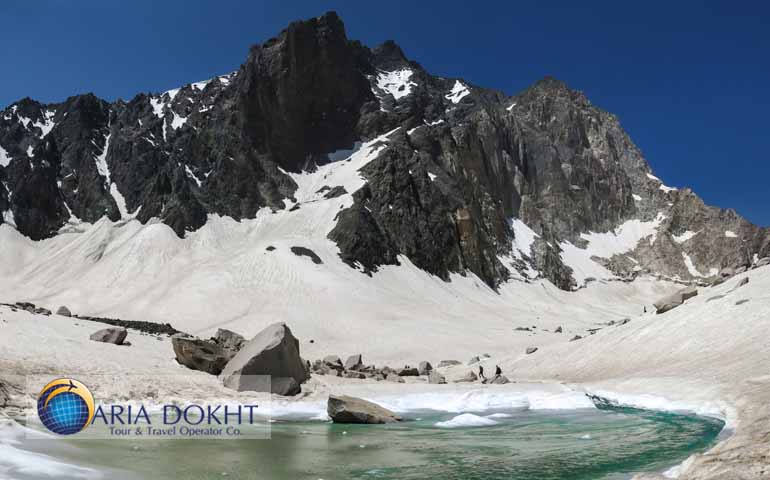 You will encounter an amazing world of mountain nature and you will be ravished by its magnificence. At the heart of Taleqan and Alamut Mountains you will enjoy hiking and trekking and will be amazed by its unique monuments such as Alamut Castle and at the end of the program you will enjoy the soothing warmth of its hot springs and spas. You may mountaineer and hike in the deep woods of Gilan and discover in the heart of its ancient forests the historic Rudkhan Castle (ghal-e Roudkhan) and the beautiful village of Masuleh. 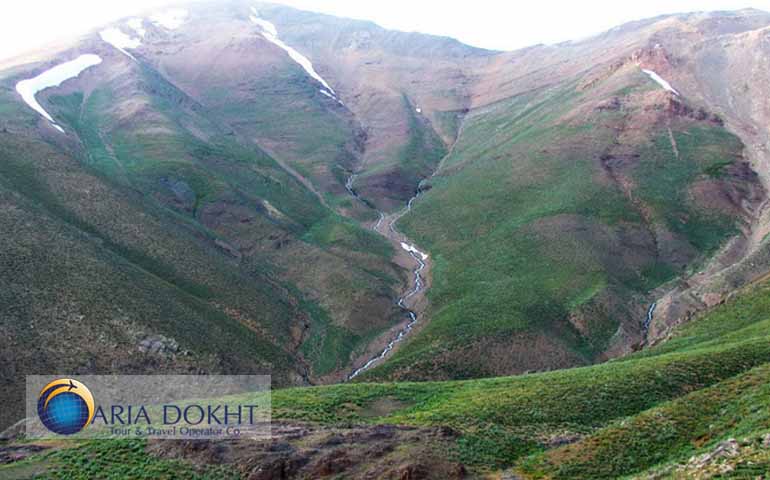 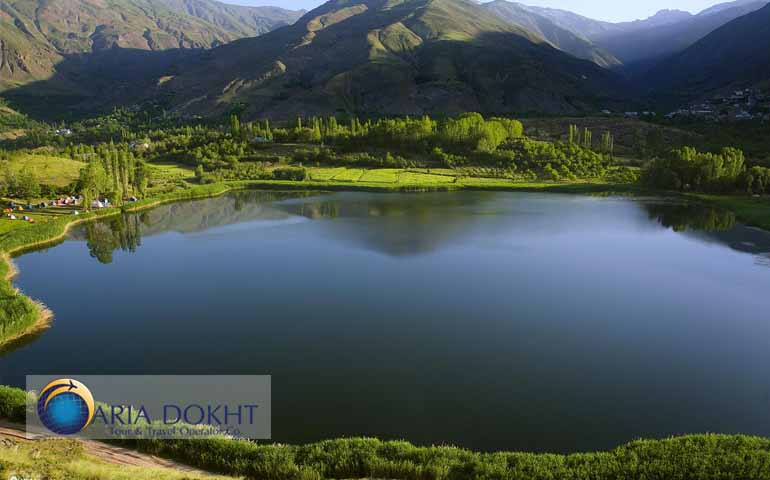 In Zagros Mountains and in the west of Iranian high plateau, you can climb the big walls of Bisotun and Yafteh, at over 1,200 meters, where you may experience an indescriable excitement mixed by fear when you feel hundreds of meters of emptiness beneath our feet. You might as well stand marveled by the magnificence of its globally famous historical monuments at the foot of the big-walls. 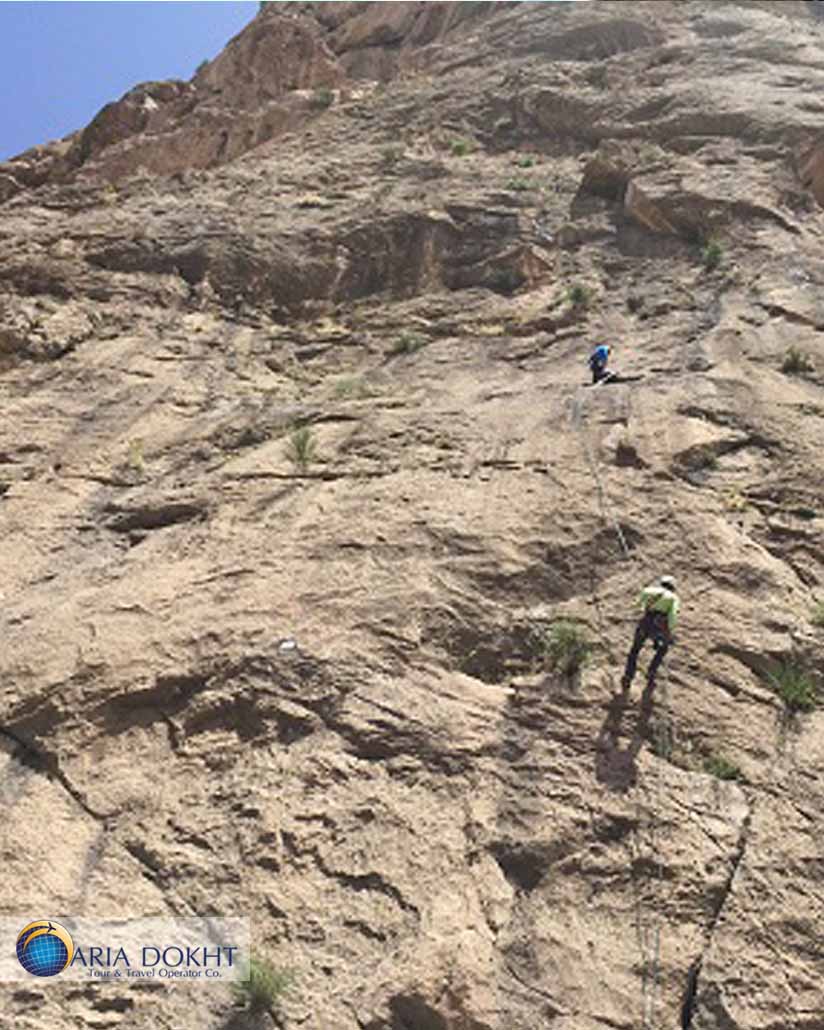 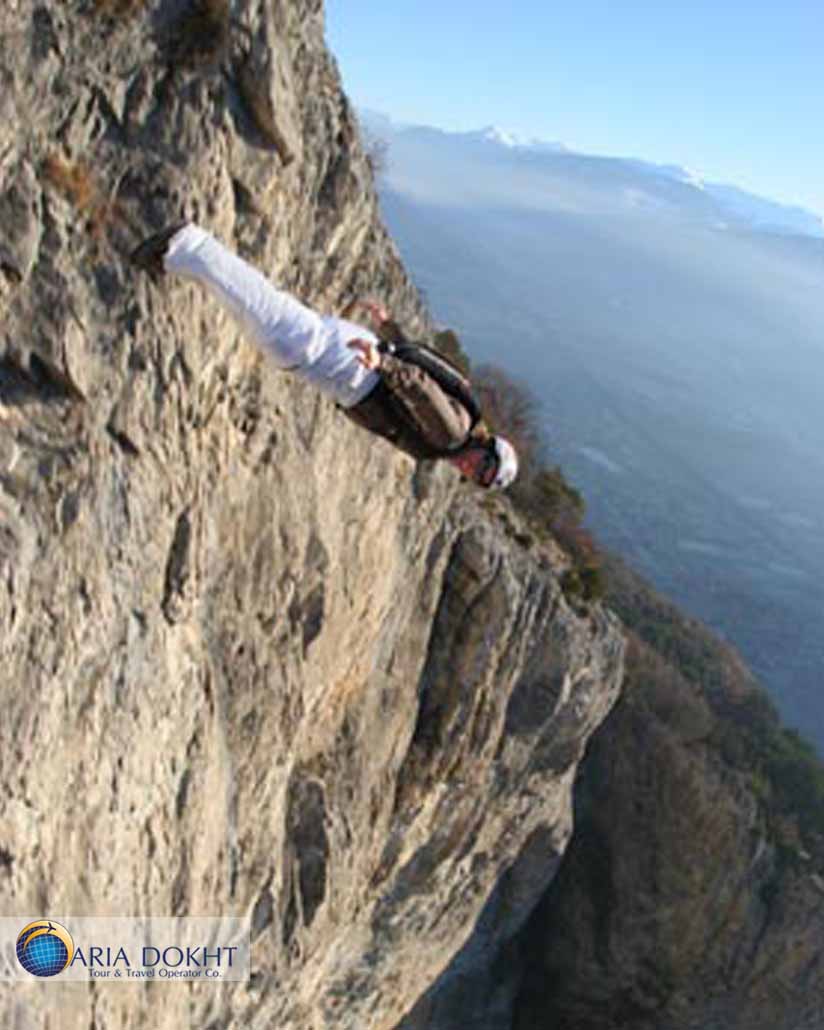 In the spring and fall, you can explore some of the deepest caves in the world and create unparalleled moments for yourselves. You may ski tour in the high mountains of Oshtoran Kuh, Zard-Kuh and Dena in the winter and spring, live with the nomads in the spring and summer and traverse its beautiful valleys with unforgettable pictures. 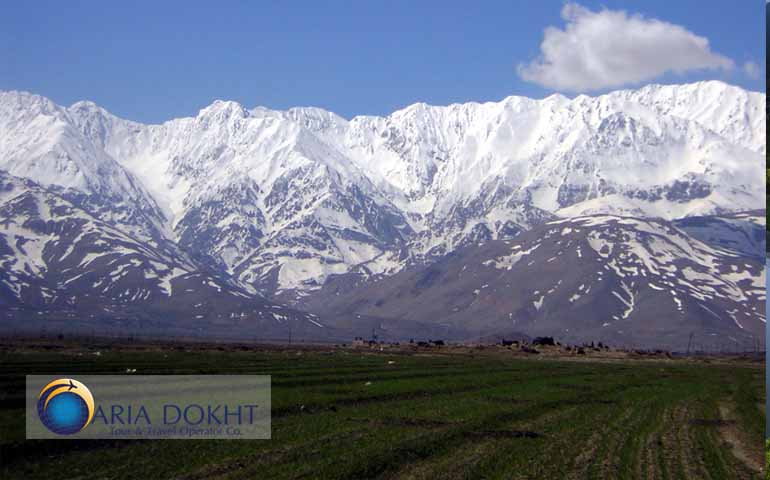 Throughout the mountain ranges and other areas, there are many potentials to launch the mentioned adventurous programs that we will recommend and show you. We will tailor them to your needs and time, with the help of the most experienced Iranian guides, hikers, and Himalayan climbers and guarantee your health and enjoyment from the moment you attend and experience these programs. 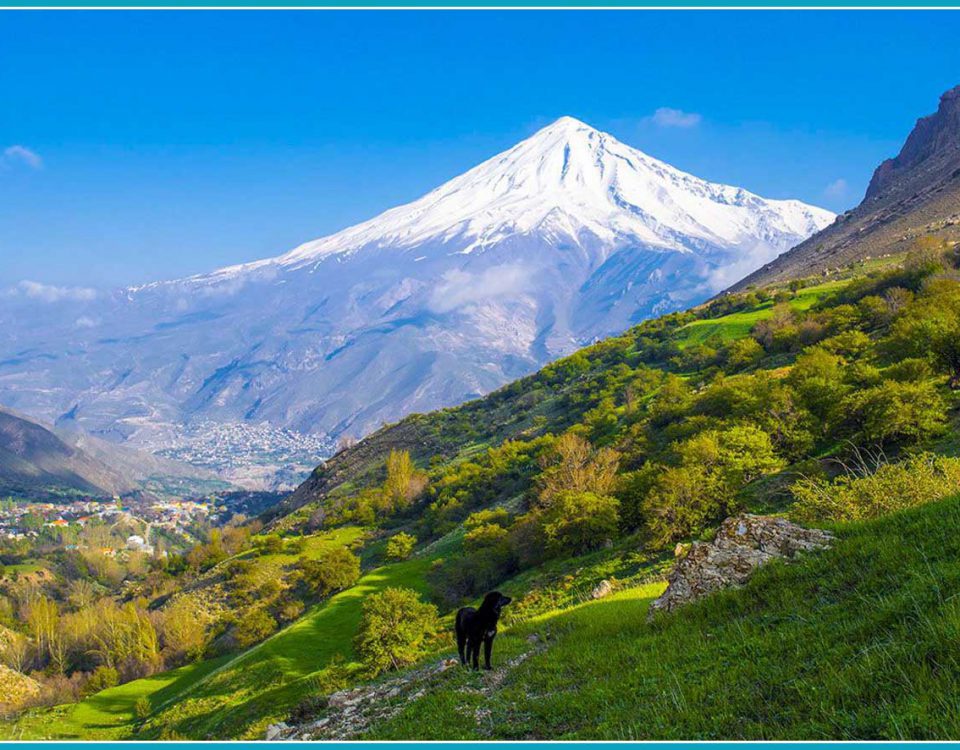